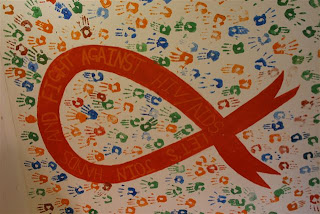 In South Africa a child is raped every three minutes and AIDS continues to spread with epidemic ferocity.


It was with disgust and much anger I read a story in today’s magazine “QWeekend” which is issued with Saturday’s “Courier Mail”. The article was headed “Hearts of Darkness”…and I can assure you the subject matter is very, very dark…and very, very tragic.

Tears streamed down my face as I read the article – not only tears of sorrow, but also tears of sheer anger and frustration. For God’s sake, this is 2010 we are living in and such atrocities are still going on with no signs of abatement!

Today I feel very guilty because I watched our Socceroos play their couple of games in the 2010 World Cup competition being played in South Africa. I should have known better! I was going to watch the final between Spain and The Netherlands, Monday morning, our time. I was quite prepared to be awake at 4 am to watch the final, but I won’t be doing so now in respect for all those innocent young children who have been raped, and continue being raped.

I’m not a fan of soccer, anyway! It’s a stupid game, made even more stupid by those idiotic vuvuzelas annoying the shit out of everyone! “Dumb and Dumber” personified!

The thought that amongst the spectators are evil perpetrators of these horrific crimes; these crimes of great magnitude make my stomach turn. I’d be a hypocrite if I watched the final. In some way it would be as if I condoned the actions of these bastards!

If you really want to know how I feel about them….if I had my way, I wouldn’t be erecting sports’ stadiums….I’d be lining the bastards up in front of a firing squad! Is that clear enough?

It’s beyond my understanding why South Africa was allowed to host the World Cup! They spend billions of dollars building sporting arenas etc., and yet they can’t fix this horrendous problem.

"Children have no voice. That's also why you'll still see the crime called "child molestation" instead of rape. Many people have a difficult time imagining a child being raped, but that's exactly what it is. Activists like Carol Bower claim the government is effectively complicit in these crimes. Quote: "We have a great deal of misogyny in government and, from what we can see by the lack of ANC investment in clinics and training programmes for a new generation of rape counsellors, a profound lack of will to tackle this nightmare head-on" End Quote.

She points to the personal life of South African President Jacob Zuma, a proud polygamist with five known wives who was acquitted of rape in 2006, but only after he acknowledged having unprotected sex with the HIV-positive daughter of a family friend. Zuma's remarks about women, sex and Zulu culture caused controversy and there were ugly scenes outside the courtroom, with his supporters setting fire to pictures of the women involved."

Another woman outside the courtroom during that trial was stoned because she was mistakenly thought to be the victim!!!!!!!!!