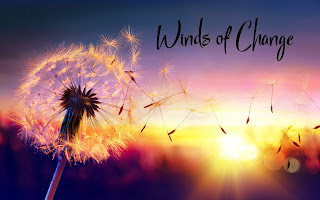 David Bowie sang about it.  He became the master of change, successfully achieving it time and time again.  (I saw Bowie live in concert at Lang Park, Brisbane in 1983.  I wouldn't have changed a thing about it, except to see him again, and again, and again....)

A leopard refuses to change its spots, no matter what life tosses at it.  Maybe if an open can of paint is thrown at the leopard, its spots would disappear.

Some dare to proffer change is inevitable. And there are those who say we should welcome it. Many don’t want change, nor do they welcome it.

“There’s nothing wrong with change if it’s in the right direction”... mused Winston Churchill.

And then, out of the blue, Lao Tzu came up with one that was a bit of a conundrum just to confuse us (pun intended…did you get it?):-

Quote: “If you do not change direction, you may end up where you are heading”!

Tzu’s quote makes me scratch my head!  What if where one is heading IS the right direction?  Did Lao Tzu consider that scenario?

To be frank, didn’t Franklin ever read “The Power of Positive Thinking”?

Freud altered our attitudes towards the couch...aka sofa, not the grass variety.

Jung came along shortly thereafter to change what we thought of Freud’s changes by consciously advising us how to unconsciously change our dreams.

In 1964 Bob Dylan reckoned the times were a-changin’. We listened intently, and began to change our minds about many things.

The Who were determined to change when they belted out “Won’t Get Fooled Again”!   I wonder if they did....

Boyz ll Men fought against change when they discovered “It’s So Hard to Say Goodbye to Yesterday”.

The Kinks felt similarly because they went “All Day and All of the Night” without a change in the beat!

Cream wanted to change colour for a while, so they entered the “White Room”.

The Doors suffered from the winter chill, and asked us to light their fire.

Some think change is as good as a holiday, but that not always the case. Some holidays can be failures.

Is the key to change hanging on my key ring, I wonder?

Does one really change?   Deep within...does one change within?  I don't believe so. A person grows - one matures (or should do).  We learn as we walk life's path, but our inner self remains the same, in my humble, personal opinion. I know my inner being....inner self has changed very little, if at all. I can't, and won't speak for others.

Is the Wind of Change one’s destiny, or just seasonal? 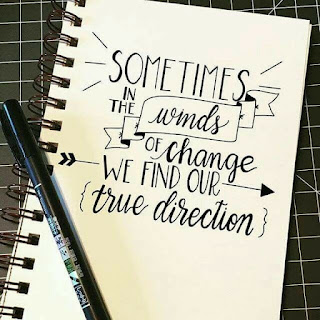 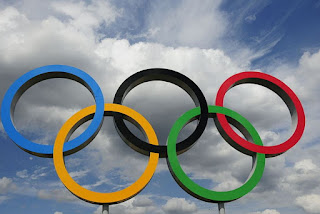 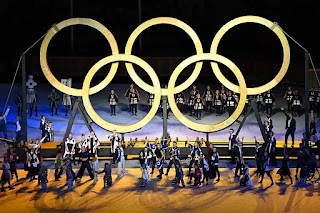 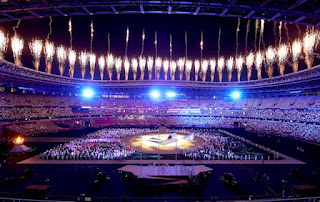 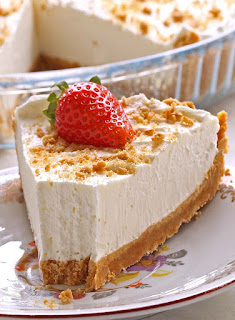 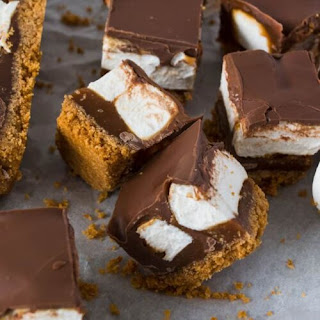 Watching the Olympic Games much shouting went on around here...by me. My voice is only now getting back to normal, as are my neighbours’ ears.  I discovered I could hold my breath for ages without expiring.  So much excitement!  It will take a month of Sundays and a year of Saturdays for me to recover.

The fearless skateboarders grabbed my attention, and held it.  I’m going to drain my neighbours’ fish ponds, with the intention of using them, the emptied ponds, not my neighbours, to hone my skills in readiness for Paris...a gold medal awaits!

BMX beckons, too.  I’ve a good chance there, as well, if only I could find my bike...and get on it!

Oh! Boy! Having had lots of practice through the years, I cleared some hurdles.

Diving into the deep end as I waited for the gymnastics to begin stopped me from climbing the wall.  I jumped through hoops, but got tangled. To top it off, the ribbons strangled me. I needed balls to finish off the rhythmic gymnastics.  The floor events did me in even though I’m a good tumbler. It took me forever to get back up off the floor.  On the uneven bars I performed well, which wasn’t surprising, I suppose.  Although, it has been a number of years since I sat at a bar, even or uneven, even.

There were many magical moments during the Olympics. The respect shown between the competitors was inspirational.  All who participated deserve medals.  In my opinion, there were no losers.  Each and every one who competed is a winner. Going from strength to strength, the competitors, in every event, proved dreams can come true.  The senses of self-belief, self-worth and respect for others – the camaraderie - shown throughout the Olympics give one hope people everywhere, not only within our own fair shores, can become better persons; that greed in all its forms, and envy, the most destructive and ugliest of traits, no longer exist.

So a few “f-bombs” and “s-bombs” were dropped, who cares?  I’d be a hypocrite if I complained about the exuberant utterances. I exuberantly utter such utterances often....

A lasting vision, which will be shown over and over again, one which will never become boring or repetitious...is Dean Boxall’s untethered reaction to Ariarne Titmus’ first gold medal.  Arnie winning her sought-after gold, and her coach’s unrestrained, spontaneous celebration were, I believe, how the rest of we Aussies were feeling when we witnessed her achievement.  For me a similar feeling continued throughout the two weeks.

Never one to shy away from the truth, I’m a sook...a big sook.  I shed many tears of pure joy and pride as I watched the Olympians.

How could one not get misty-eyed when the high jumpers, Italy’s Tamberi and Qatar’s Barshim, shared the gold medal?  It was a sight to behold; sportsmanship at its best. Topping it off was Tamberi’s reaction when his fellow countryman, Lamont Marcell Jacobs, won gold in the men’s 100 metres final. Jacobs’s win created history by earning Italy its first ever gold medal in the event. It was the first time since 2004 someone who isn’t Usain Bolt has won the title. Yep! Once again my tears flowed.

The spirit of the Games was tangible.

As a keen spectator via my TV, so much fun was had by me while watching the breathtaking efforts of those who participated in the various, heart-stopping events.

The spirit of the Games was tangible.  The Olympics were a welcome relief from the myriad troubles of today’s world...a welcome reprieve from the abounding confusion, hypocrisy, and contradictions thrown at us day after day, hour after hour.  The Games were what reality TV should be at all times...not that other stuff!!

It was two weeks of laughter, cheers and tears...no jeers.  Pure gold!

Will I be watching the Paralympics? Too right I will.  Will my tears flow once more, too right they will! I don’t have nerves of steel...mine are as soft as marshmallows

In the words of David Bowie; “We can be heroes...”  It shouldn’t be an impossible dream. Imagine what a wonderful world it would be if it were possible. Freddie said it well...”We are the champions!”   Worthy goals for each one of us, not only the Olympians, to strive for.....

Chocolate-Caramel Marshmallow Bars: Grease and line a 6cm deep 22cm square brownie tin with baking paper. Blitz 250g granitas to crumbs. Add 199g melted butter; mix well; press into base of pan. Using heavy based saucepan over very low heat, dissolve 300g white sugar into 1/3c water while gently stirring. Use a pastry brush with a little water to rid pan sides of any sugar. Stop stirring when sugar dissolves; turn heat up to med-low; bring to slow boil. Boil 10-15mins until syrup turns a deep amber colour. Add 113g unsalted butter; stir until melted; add 1/2c thickened cream; stir well. Bring caramel back to boil, about 6-7mins; stir often until mixture thickens and is a dark golden brown colour. Drizzle a little caramel over biscuit base; place 280g vanilla marshmallows (if using large, cut in half) over top, pressing them quite close together. Pour remaining caramel over top allowing it to drizzle down into the gaps. Chill for at least half an hour before proceeding. Topping: Melt 300g milk chocolate in 30sec increments; stir well between each burst until just melted; pour melted chocolate over top; spread evenly; chill  until set.