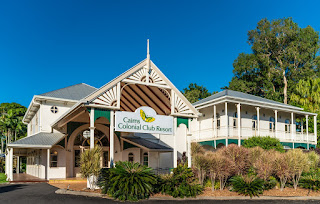 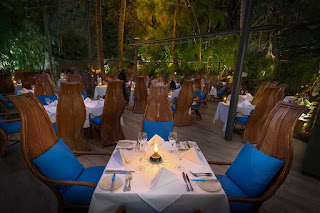 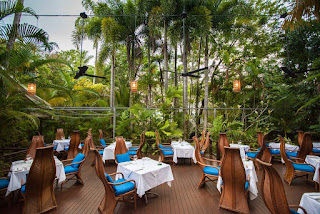 With the pre-Christmas functions, and Christmas Day “done and dusted”, both at work and at home, New Year’s Eve rapidly approached.

At the resort, a rock-country music infusion party was planned for New Year’s Eve, with two bands hired for the evening’s entertainment. The rock band would play their bracket, followed by the country music group, alternately, throughout the night to allow for no breaks in the momentum of the celebrations.

Outside around the pool area gas barbecues were set up. On offer was a broad range of sizzling foods such as fresh local seafood, steaks, sausages, ribs, lamb and pork chops, burgers and barbecued corn cobs...all accompanied by a wide range of garden-fresh salads. A tantalizing, varied array of desserts catered to the madding, party-loving crowd. Portable cocktail bars were also strategically placed around the pool, taking pressure off the interior bars.

During our management meetings leading up to the event, I had suggested, and fought for laser lights to be installed on the upstairs’ balconies of the building surrounding the pool area. My idea was for the lights to coordinately flash over and across the resort’s massive pool. However, I fought a losing battle with the then Sales and Marketing Manager, who had a false god-like impression of himself.  He, who shall remain nameless, wasn’t liked by many.  I wasn’t alone in my impression of him.  If his nose had been any higher in the air he would have suffered from altitude sickness.  His nose could also be used as a ski slope because he looked down it upon others in his presence.

Another of my suggestions was the stage area where the country band would play would be decorated with hay bales, wagon wheels, and a weather-beaten skull or two of bullocks. Mr. High-and-Mighty cringed and readied himself for a further battle with me over this plan, but, like Rocky, I won that bout.

One day leading up to New Year’s Eve, Alan, the Front Office Manager, who had become a good friend, and co-conspirator, and I went off on a “beg, steal or borrow” expedition throughout surrounding Northern Beach areas in search of the stage decorations.

We borrowed the resort’s ute/Toyota utility to conduct our door-knocking search.   A few hours later, Alan and I arrived back with the ute’s tray loaded with hay bales, a wagon wheel, and two old, sun-bleached bullock skulls.

The look of disgust on the Sales and Marketing Manager’s face made our trip, during which we had trudged across a couple of overgrown paddocks, worthwhile.  His attitude made us laugh and, even more determined to achieve the desired “country” effect. To his chagrin, the decorations received a great response and words of admiration from the party-goers on the night.

Some people just don’t know how to have fun!  Their loss....

Andrea/Andrew joined the resort revellers. He thoroughly enjoyed his first – and only - Aussie New Year’s Eve.

From the wide smiles on the happy faces of the jovial crowd, and staff alike, all who attended enjoyed the evening.  It had been hugely successful.  It was a hoe-down and rock show combined. Everyone let their hair down and kicked up their heels as they welcomed in the new year.

All good things come to an end.  Soon after New Year’s Eve, Andrea had to return to Italy once more. So it was back to life on my own without my lively, fun inamorato to distract me during my leisure hours.

Before he left. Andrea arranged for me to meet with a group of Italian tourists who’d been travelling Australia on a tour organized by his father’s travel business back in Milan.

The group was arriving in Cairns a week or two after Andrea returned home, and, fortunately, would be in the area on my day off.

Finalising the necessary details, I hired a Tarago van from Avis. Come the day, I headed off to pick up the group from their inner-city resort, “The Cairns Colonial Club”, at the pre-arranged time.
Soon the eight non-English speaking, boisterous Italians, and non-Italian speaking “tour guide” aka me were merrily on our way out of Cairns en route north to Port Douglas, 70kms north along one of the most beautiful strips of highway in Australia.

One of my guests for the day was a dentist from Rome.  Fortunately, he spoke some, just-understandable, English. He volunteered to be the “translator” during the adventure.

Our merry group soon discovered, however, language didn’t impose a barrier, and somehow we had little trouble understanding each other. I’ve sometimes been told I “talk with my hands”, so I guess that helped a bit!

Not knowing quite what my group of wayfarers expected from the day, or where and how exactly they wanted to spend their day, for a while I was in a quandary.
Did they want to dine in a fancy restaurant for lunch? Were the very commercial tourist-directed stores on their agenda?

Always preferring to attack a problem straight on – head on - rather than work up a lather I asked the happy folk point-blank what they would like to do.

With much head-shaking, and “No, no, no’s” to suggestions of a fine-dining experience, I took the bull by the horns.  I suggested we...meaning “me...buy a variety of cheeses, salamis, olives etc., along with crunchy bread sticks, baguettes, liquid refreshments.

Once armed with our “picnic” supplies safely in our possession, we’d go in search of a few shady palm trees and she-oaks along the foreshore at Four Mile Beach, a little south of Port Douglas.

My suggestion was received with unanimous agreement.

Outside the Post Office Hotel in Port Douglas’ main street, some suggested we buy bottles of wine to help wash down our lunch.

At that stage, my new Italian friends had never heard of our ubiquitous, infamous wine casks. Shaking my head at their “bottles of wine” idea, I purchased a cold cask of dry white wine, and a cask of red wine. My travel buddies were suitably impressed.

Excusing myself, I ran back into the nearby, small supermarket, and bought a couple of packs of paper cups, and paper napkins.

Armed with our supplies, we piled back into the Tarago, and headed off to the beachfront.

The plan to “break bread”, washed down with wine at the foreshore overlooking the Coral Sea had been one of my better ideas, I must admit.

The Italian visitors were in absolute awe of their surroundings.   That day, we had the beach and the foreshore to ourselves.

We sat in the shade of the trees on the grass verge leading to the wide stretch of golden sand with a gentle sea breeze wafting softly, keeping us cool.

Some wandered along the soft sand, wading in the shallows. Others lazed languidly beneath the trees in the dappled sunlight.

They all said it was the best day and time they had had during their holiday tour of Australia.  That day was their last day on our sunny shores because they were flying back home to Italy the following morning.

At the time, and I imagine it remains pretty much the same these days, only the well-to-do Italians travelled “Down Under” for their vacations, so this particular group. who had been entrusted into my care for the day, had spent their time while holidaying in Australia – in the cities, staying in classy hotels and resorts, dining in the best restaurants.

However, to them, that glorious, relaxed, fun-filled, “basic” day had been the best, and I’m sure, one which has remained uppermost in their memories of their holiday in Australia.

Reluctantly, it was time to turn the Tarago around, and head back to Cairns city.
With a van full of enthusiastic, enraptured day-trippers, their enjoyment of the day so completely obvious, I drove along the meandering coast road filled with contentment.

The smile on my face, and the warmth in my heart reflected the feelings of everyone on in the Tarago.

Around 4.30pm, I deposited my captivated, blissful assemblage at the front lobby of their resort. Thanking me profusely, I was crushed by hugs and overcome with kisses on my cheeks. I promised each and every one of them that I would be at the Cairns airport the next morning to bid them farewell.

I fulfilled my promise. They were delighted to see me, and a little surprised, I think, that I took the time to say “Arrivederci”, “Ciao” and “Good-bye”.
Even though we had known each other for part of one day only, it was an emotive leave-taking.

One lady in the group was from San Marino. She gave me a 1986 500 Lire coin, as a token of her thanks, and in remembrance of a joyful time spent together.

It remains in my memorabilia to this day as a very fond reminder of the wonderful people I shared those few hours with during an unexpected, wondrous trip to Port Douglas.

A couple of weeks later, I received a telephone call from Giuseppe (Beppe), Andrea’s father, thanking me extravagantly for taking such good care of his clients. He told me each and every one of them had reported back to him, raving about their “best day” spent in Australia.

My work at the resort, once more, took over my life. Long, busy days and nights, with some days extending up to sixteen hours, filled my time, leaving little left over for other pleasures except sleep.

With only Pushkin, my beloved pet, my ginger cat, to keep me company at home, I missed the liveliness of Andrea’s presence. When his physical being was in my life, my life was never dull. His natural exuberance and zest for living was constant, even when we relaxed together listening to music.

Late one evening, ringing of my telephone interrupted my reverie. Andrea’s voice greeted me from the other end, from across the ocean and land, he was returning to Australia once again.
My heart somersaulted with joy and eager anticipation.

***In 1980 ownership of the Nautilus Restaurant freehold and operation changed when the Bowdens sold the property to their close friends Diane Cilento and Anthony Shaffer***. Diane had enjoyed celebrity status in the 60's and 70's with a successful film and stage career, and a marriage to Sean Connery while he was starring as the first James Bond.

Diane had moved to Port Douglas with Tony a couple of years earlier to purchase the property that is now Karnak Play House. Diane & Tony’s background in theatre saw the Restaurant further develop its theatrical demeanour in the early 80’s. This was a decade of excesses, & Nautilus surely held its own in all things decadent, as everybody who was anybody visited. Nautilus won Best Restaurant Queensland & was runner up for Best Restaurant Australia.

***Anthony Shaffer wrote the acclaimed play (later made into a movie starring Michael Caine and Sir Laurence Olivier)...."Sleuth".  He also wrote the screenplay of "The Wicker Man"...a movie in which Diane Cilento starred.  It is were they both met.

Through the years my path crossed a couple of times with Diane in one way or another...but those are other stories for another time...