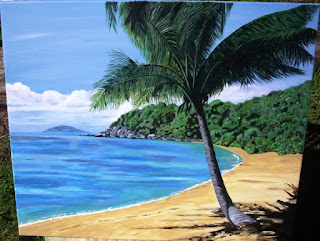 Acrylic painting by me of Orchid Beach, where the resort was at Cape Richards on Hinchinbrook 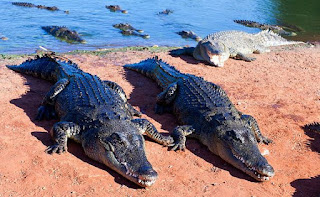 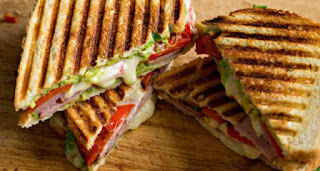 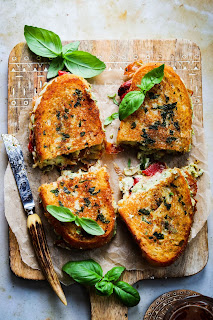 There are many things, when working within the hospitality industry, which make being in the industry, in whatever form, interesting, to say the very least.  Most folk met along the way are great, but, of course, there are always a few snags in the midst to muddy the waters.

I enjoyed the latest, all too short season of “My Kitchen Rules”.  For me, one episode, in particular, awakened memories. Once upon a time, in a life lived long ago, I cooked a lot, both professionally, and for personal reasons. Nowadays, I do neither.

A memory stirred, not shaken, was from my Hinchinbrook Island days.  My head chef’s foot had turned a deep purple, almost black, from coral poisoning. With no time to waste, I had him whisked off to the mainland for professional medical attention before his foot dropped off!  My second chef was off the island enjoying a break from the heat of the kitchen. With a resort full of guests needing to be fed, I donned an apron and raided the cold room and freezer.  I took a carton of what I thought were chicken thighs from the freezer.

As they started to defrost I was surprised at the size of the thighs.

“Bloody big chickens…they must be turkeys!”  I thought.  It was me who ended up being the turkey.  What I’d defrosted were crocodile legs!

At the time…I don’t know if the situation remains the same nowadays…a licence from the Edward River Mission Crocodile Farm, (now known as Pormpuraaw) in Cape York was required to purchase croc meat. Not wanting to waste the defrosted meat, I set to, letting loose with spices, herbs, and garlic, along with wine for marinating, razor-shape knives, and a wild, culinary imagination.  “Waste not, want not”.  No way in the world were my guests going to starve …and starve they didn’t. They loved their accidental croc dinner.  None jumped ship to swim ashore upon learning they’d eaten crocodile meat, which was just as well because salt-water crocodiles inhabit the waters of Missionary Bay…enough of a deterrent.

A few years later, when cooking in another restaurant, on the menu I put crocodile kebabs as an entrée. They became a popular choice. At the same restaurant, up in the Bowen Basin, one memorable time the Yatala-based head office accidentally sent me a box of emu meat!  Fortunately, red wine and garlic are great disguises.  After slicing the emu meat thinly, scallopini-style, and marinating it in the above camouflage, Old Man Emu had a new lease on life.  The stars of good fortune were shining bright that night; it was an evening the hierarchy at Newlands Coal Mine were hosting a group of American financiers at the restaurant. When the US visitors saw emu was a “special” for the night, they ate me out of house and restaurant.  I asked head office never to send emu meat to me again.

Through the years, at various venues, as well as the above-mentioned, I’ve cooked some interesting food.  For example, snails/escargot, frog’s legs, eel, and ‘roo…and, oddly enough, once and once only, turtle meat.   I’ve no desire to do so again of any of the above.

I’m proud to say, when cooking in a Gympie restaurant circa 2000 I made a croquembouche (no crocodile was harmed in the making). My croquembouche was as tall as the Eiffel Tower, with no inclination to emulate the Leaning Tower of Pisa.  It’s no crock!  It’s also not a crock my favourite way to finish off a long day and night toiling away in a restaurant kitchen was to feast upon a toasted/grilled cheese sandwich.  Even now that I’m a lazy old lady of leisure, toasted cheese sandwiches remain regular favourites.  Cheesy as it sounds, I love them!

Grilled Cheese Sandwich: Cut 2 bacon rashes in half; cook over med-low heat until crisp. Transfer to paper-lined plate; keep bacon fat aside. Wipe out pan; return to med-heat. Spread butter on 2 bread slices; place on pan, about 2mins.Transfer to cutting board toasted-side-up. Place one cheddar cheese slice on top of 1 bread slice, followed by bacon, tomato and avo slices. Top with second cheese slice; close sandwich. Add half of reserved bacon fat to pan; heat over med-low heat. Add sandwich; cook, until golden brown on both sides, and cheese is thoroughly melted.

Grilled Cheese Sandwich-Italiano: Heat 1tbs olive oil in large pan over med-heat. Add 57g prosciutto in single layer; cook until starting to crisp, but not dry. Remove from pan; place on paper-lined plate. Set aside. Remove pan from heat. In a bowl, whip 227g ricotta with 1/4c homemade or store-bought pesto until well combined. Set aside. In bowl, combine 85g each provolone and fontina cheese with 1/4c marinated sun-dried tomatoes.. In a small bowl, blend 6tbs softened butter, 1/4c grated parmesan and 2tbs chopped, fresh parsley; season to taste. To assemble; place 4 slices 1/2-inch thick sourdough bread on work surface. Slather each slice with the pesto ricotta (reserve extra for another use). Top 2 slices with about ½ cup grated cheese blend.  Top with 85g drained, marinated roasted red peppers and prosciutto. Add a little more of the grated cheeses; place other 2 slices on top, ricotta side down; press together slightly. Heat same pan used for prosciutto.  Spread herb butter on top of each sandwich; put buttered side down in pan. Spread butter on top side. Cook until bottom side is golden brown and crisp, about 5mins. Flip and cook another 5mins on other side until golden, and cheese has completely melted.