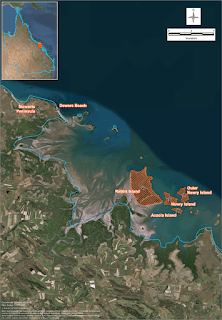 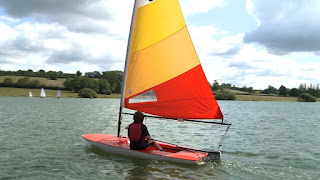 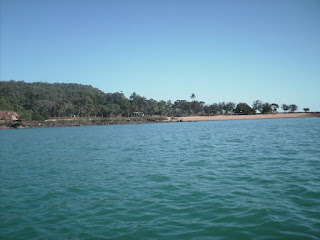 (Preface:   I related this Newry Island tale a few years ago, but believe it worthy of telling again.  I hope you do, too.   Also, I made a necessary amendment to the first chapter below...Glen arrived to the island via a small sailing skiff, not a Jet Ski.

A few years later, I posted another story about one of my guests on Hinchinbrook Island who took, without my permission, the resort’s small sailing craft, similar to a Hobie Cat, but smaller still.  I’d not been aware he had done so. Without thought to his own safety, or that of others, he sailed off to the Brook Islands further out to sea on the Great Barrier Reef.  Again, in that instance, dusk had begun to descend...danger loomed.   I asked a male member of my staff to grab the resort’s motor boat, and go to his rescue.  I gave the idiot guest the rounds of the table upon his return to the island).

All through the sleepless night I kept hoping I’d hear Glen’s voice echoing up from the beach; calling out to me, making me aware he’d made it back to the safety of Newry Island

It was a vain hope, I knew; but I had to hold onto something in an attempt to retain my sanity.

At first light the next morning I was informed by Air-Sea Rescue they’d resumed their search.

Once more I expressed my thoughts about where I felt Glen most likely would be. My feelings had strengthened as each moment had passed through the night. The corridor; the avenue of my thoughts had to be pursued, I believed; but, it became clear to me I was alone in my belief.  Nobody was listening.

It didn’t make sense to me that Glen would have ended up over towards St. Helens Beach where Air-Sea Rescue were directing the search.  They had set their minds upon that area, and wouldn't be swayed. My attempts were futile.

No matter how often I described the scud that had gone through as Glen was about to round the northern point of the island’s main beach, my words fell on deaf ears.  My attempts were ineffectual, but I was persistent.  I insisted I believed the wind would have picked Glen up, and pushed his tiny craft directly northward. My thoughts were the currents most likely would have carried him towards Midge Point.  Politely, but firmly I told the rescue crew I believed they were looking in the wrong area.  However, my pleas were ignored.  What the hell would I know!

My opinion made sense to me.  Even though I wasn’t familiar with the currents in the area north of Newry Island, my belief seemed logical to me.

To reiterate, Glen had just begun rounding the northern point of Newry Island when the scud hit.

In my mind’s eye, I imagined him being picked up by the strong wind, and forced in a northerly direction towards Midge Point.  It just didn’t sit right with me that the scud would have pushed him directly west between Newry and Rabbit Island.  To me, it didn’t make sense.  If Glen was at the northern point on Newry - in my reckoning the wind would’ve driven him northward, not around a corner, off to the west!

No amount of talking on my part convinced the searchers to consider my thoughts. I was beating my head against a brick wall. I felt like pounding, not only a brick wall, but the Air-Sea Rescue men, as well.

As each second passed I was becoming more frustrated, and very angry.  They’d put me in a hopeless, helpless situation; and wanted to keep me there!   I had no voice.

What added to my frustration was - I believed I wasn’t being listened to because I was a woman!

Hell!  If I was capable of living alone on an island; if I was capable of running the whole show single-handedly, from driving the boat to and from the mainland; ferrying guests and provisions; operating the generators (driving a motor boat and operating generators I’d never done before I arrived on Newry Island); handling the gardening; cooking; cleaning; running the bar – everything to stay afloat, not only on the ocean, but on land - surely I deserved a fair hearing!

As it was, I could’ve talked until I was purple in the face. My words were going over their heads; in one ear and out the other.  On the other end of the phone, and my two-way radio, they were probably laughing at me.  They could laugh their heads off for all I cared.  I wasn’t going to give up!  I wasn’t going to give up on Glen.  The Air-Sea rescue fellows could keep searching the waters between Rabbit Island and St. Helens on the mainland until the fish came home, and the sting rays lost their sting.  As far as I was concerned, they could be WRONG!

My intention was to keep harping on the matter until I was hoarse. I had all the time in the world; but Glen didn't!  I cared not how annoying I was. Continue along my vein of thought I would until someone was prepared to listen to me.

Between 11 am and 11.30 am on the Monday, almost 24 hours later, I saw a trawler arrive in the channel between my island and Outer Newry Island.  It set anchor a little north of my mooring…a few metres away from my boat.  The skipper, “Rolly” Rollinson never came ashore whenever he anchored up in the channel before heading out to sea, or on his return trip to Mackay Harbour.

I’d never met the man face to face. I wouldn’t have recognised him if I’d fallen over him, but I had spoken with him via two-way radio and phone a few times. For various reasons “Rolly” wasn’t liked by many of his fellow-trawler skippers; most of whom, with their crews, were regular patrons of the resort’s bar. Most of them were good fellows.  In the majority of instances, I had no reasons to doubt their words, or opinions.

“Rolly” was a fairly arrogant fellow.  Years before he’d had a falling out with Willie Litz, the lessee of the resort area on Newry Island. Their dispute was none of my business.  Willi didn’t live on the island; I did.   “Rolly” had fallen out with many people, I’d been told, but his standing within the trawler community was the least of my concerns.

I radioed “Rolly”.  Not wasting words I described the frustrating position in which I’d found myself.  I explained what had occurred over the previous 24 hours, expressing my belief about where I thought the missing Glen was most likely could be found…up towards Midge Point, on the mainland; not where the search was presently being conducted.

Precious time was being wasted!

To my surprise, “Rolly” agreed with my assessment.

I asked “Rolly” if he was prepared to get in touch with the Air-Sea Rescue people, and relate his thoughts; but, when doing so, to leave my name out of it.  They’d take more notice of him – he who had been sailing those waters for many years – than they were taking of me – a mere female!  They'd made it very obvious they were taking no notice of me.

The rest of Monday afternoon I spent anxiously by the phone and two-way radio.  There was little else I could do, but wait…and wait...

Once again, like clockwork, the sun had begun its descent, and no positive results regarding Glen’s safety were to hand. Night was just around the corner.

Shortly after 5 pm on Monday, the island phone rang.

On their final fly-over for the day before pulling the plug on the search, with the intention of recommencing the search the following morning, the plane’s pilot spotted something on the beach, on the southern end of Midge Point, on the mainland.

It was Glen’s small sailing skiff.  On the beach, Glen was standing beside it waving like a crazed lunatic!

Oh! God!  It was the best news I’d heard in years!

Tears of joy and relief flowed, unhampered, down my cheeks.  I cheered loudly with no one within reach to hear other than Pushkin and Rimsky, my two furry best mates.  Barely moving a whisker, they didn’t mind being disturbed from their cat naps

Glen had been found where all along I had thought it most likely he would have been.

The scud’s strong wind had picked him up, and carried him northward. He didn’t turn the corner, nor was he forced west toward St. Helens. His passage along the ocean had been taken completely out of his control.  He’d spent Sunday night, and Monday in the open sea.  In sheer desperation, and with the will to survive, he’d held onto his small sailing skiff. At one point it had flipped over.  Fortunately, he managed to right it.

Finally, the currents nudged him toward the shore about an hour before the search plane spotted him – on their last fly-over for the day!

I felt extremely grateful to the faceless “Rolly” for insisting the search be extended to that particular area.

Once I’d learnt Glen was safe, I made contact with "Rolly" Rollison to give him my sincere, heartfelt appreciation for his most important role in the play...the drama.

I never did meet “Rolly” face to face, but I was grateful...forever grateful...for his actions in assisting in the search for Glen...and for listening to me.

The following afternoon...on the Tuesday after his rescue...Glen rang me from Mackay to thank me for alerting the authorities etc.  He’d spent Monday evening in hospital where he'd been kept under observation overnight. Fortunately he had suffered no injuries from his dramatic ocean adventure.  Glen was calm and collected when we spoke. It was how he was at any given time.

I never saw Glen again.  I think he’d had his fill of the ocean to last him for a while.  Who could blame him?

Three or so years later I was the cook/chef at the Town & Country Hotel Motel in Collinsville; back on dry land, with no ocean in sight.

One evening after dinner service I chatted with a young fellow sitting at the lounge bar. He had the Hastings Deering insignia on his shirt.  The insignia was what had drawn me to him. He was a motel guest, being in town to visit the nearby Collinsville Coal Mine, and had been one of my dinner guests.

During our conversation, I related the above story.

A wide smile broke across the young man’s face as he said: “So you’re the one! You're the "Lee"! Glen told me about you! He’s told the whole crew!  I know of the story you’ve just told me! You have no idea how grateful he was for what you did.  He speaks often about that time. Everyone at work knows about it!”

I was taken aback to discover the story I’d just finished sharing was familiar to the young bloke I'd never previously met...not until that evening at Collinsville’s Town and Country Hotel-Motel.

At the time, Glen was still employed by Hastings Deering.  I asked the fellow sitting beside me at the bar to pass on my very best wishes to Glen the next time their paths crossed.

Through the ensuing years I’ve often wondered how Glen’s life has panned out.  I hope he met a fine young lady to spend it with; he was, indeed. a fine fellow.

It is a small world after all.  And, it was a lesson well-learned...never embellish when telling a story.  99.99% of the time...the six degrees of separation come into play.  If you embellish...lie...you will get found out!!