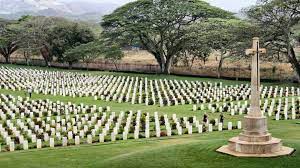 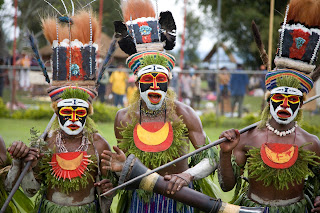 23rd July, 2022 came, and, it went…but the precious memories the date aroused within me remain; memories of a special few days in my life.

In July, 1987 the Queensland Tourism & Travel Corporation aka “QTTC” decided to send a tourism delegation to Port Moresby. It would be the first of its kind to venture into the uncharted territory of our northern neighbour. Nine representatives… seven men, and two women (I was one of the latter variety) were chosen to promote their ‘product’.  At the time I was manager of the then Cape Richards Resort on Hinchinbrook Island.  My role was to represent the Hinchinbrook, Cardwell and Johnstone Shires.

During our Port Moresby adventure Papua New Guinea’s Remembrance Day, 23rd July, fell.  The organisers of our visit had not been informed a Public Holiday would steal a working day from the tourism mission.  As it turned out, I was, and still am glad the fact had been overlooked. The Avis Area Manager invited the group to join him in the Avis Tarago for a trip to the start of the Kokoda Trail/Track on the 23rd.  We eagerly accepted his offer.

Firstly, after departing Port Moresby the following morning, we visited the historic Bomana War Cemetery, situated just outside the city limits, on the road to Sogeri, which is the starting point of the Kokoda Track. Disembarking at Bomana an atmosphere of respect and deep sorrow filled the air. Somberly, lost in reverie, with tear-filled eyes, the group separated to wander alone through the beautifully maintained cemetery. No words were needed. Words would’ve been superfluous.

Upon leaving Bomana we commenced the climb up the winding range to the Sogeri Plateau, which is around 800m above sea level, and 46kms from Moresby. Halfway up the range we spotted a Papua New Guinea “warrior” dressed in decorative attire standing out on an escarpment. Pulling to a halt, we leapt out of the vehicle and went over to him. Smiling gallantly in his colourful make-up and feathered head-dress, the “warrior” said we could take his photo for 5 kinas a pop. We each paid him accordingly. The trick was, we used our cameras and films. As we clicked away, the smile on the canny” warrior’s” face betrayed his thoughts: “Sucker tourists!”

One of our astute “sucker tourists” said, “Did you notice his watch?  It was a Rolex! His BMW was probably parked around the corner!”  We laughed.  Good on him; we didn’t care.  The “warrior’s” appearance added to our fascinating experience.

Awed by the magnificence of the scenery along the way, we finally reached the Kokoda Inn, which is at the beginning of the Kokoda Trail.  Pinned to the wall behind the primitive, but atmospheric bar were hundreds of monetary notes from over the years, from many countries; mainly notes from Australia, Britain and the USA. Fascinated, we didn’t hold back with our myriad questions about Kokoda and its history. PNG Remembrance Day marks the anniversary of the first engagement between the opposing troops…the Aussies and the Japanese…on 23rd July, 1942.  The Australian force was outnumbered as the long fight withdrawing over the Owen Stanley Ranges began.

Kokoda became Australia’s most significant campaign of the Second World War.  More Australians died during the campaign than in any other during the war. The average age of our brave soldiers was between 18 and 19 years. Many of those young men lie buried in the Bomana War Cemetery.  The compassion and care shown by the Fuzzy Wuzzy Angels, the local villagers who carried and cared for wounded and sick Aussie soldiers, taking them to areas of safety, will always be remembered and admired.  The Fuzzy Wuzzy Angels will forever be respected for their brave, selfless deeds.

I’m glad I had the opportunity to visit Port Moresby and its surrounds. Among the sombreness we also enjoyed many light-hearted moments. A few incidents at our hotel would’ve given “Fawlty Towers” a decent run for the money. “Manuel” had a couple of local waiters competing for his job…but those are tales for another day….